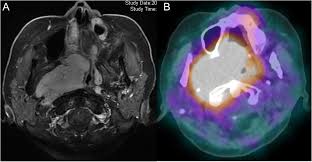 In March 2013, a 50-year-old smoker without medical history presented with asthenia and weight loss (4 kg). Medical investigations revealed a CD4 lymphopenia without AIDS infection and an excavated opacity measured 32 mm × 51 mm in the in right lower lobe (Figure 1) with a right hilar adenopathy in the chest CT-scan. Pulmonary fibroscopy revealed an abnormality on the right vocal cord but no bronchial lesion. The FDG-PET (Fludeoxyglucose Positron Emisssion Tomography) scan showed hyperfixation of the excavated pulmonary opacity and of the adenopathy (Figure 2 and 3). Because of this suspicion of pulmonary malignancy, surgery was scheduled. In April 2013, the patient was operated (nelsonectomy with lymph node resection) and pathological analyses revealed no carcinoma but granulomatous inflammation in lymph nodes without malignant cells. Bacteriological swab were positive with Gram-positive coloration and few days after, the culture was positive with Nocardia abscessus. Antibiotherapy was initiated with an association of trimethoprim and sulfamethoxazole. Treatment was continued for 6 months with a positive evolution and extinction of the pulmonary opacity and the adenopathy. Abnormality of the right vocal cord was explored. It was in situ carcinoma that was taken of in August 2013. Currently, the patient doesn’t present a relapse of his infection and stop tobacco.
Nocardiosis is difficult to diagnose on the basis of clinical, radiological or histological findings. Nocardiosis infections are responsible of different clinical presentations which are unspecific.
Nocardial infections can mimic neoplasia or inflammatory disease. The definitive diagnosis depends on the isolation and identification of Nocardia species. Thus, it is important to maintain suspicious cultures for a long time to increase their sensitivity, especially in immune compromised patients and in patients with chronic pulmonary disease.
Early recognition and initiation of an appropriate treatment can lead to successful outcomes. General treatment recommendations for nocardiosis are hindered by the lack of prospective controlled trials. Optimal antimicrobial treatment regimens have not been firmly established. Trimethoprim-sulfamethoxazole is the most commonly antibiotic used for the past 50 years despite bacteriostatic activity.

Authors should submit manuscripts online at https://www.scholarscentral.org/submission/international-journal-case-reports.html   or send as an e-mail attachment to editorial office at casereports@emedscience.org / caserep@emedicalsci.org