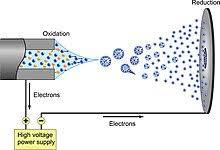 The liquid containing the analyte(s) of interest is dispersed by electrospray,into a fine aerosol. Because the ion formation involves extensive solvent evaporation (also termed desolvation), the typical solvents for electrospray ionization are prepared by mixing water with volatile organic compounds (e.g. methanolacetonitrile). To decrease the initial droplet size, compounds that increase the conductivity (e.g. acetic acid) are customarily added to the solution. These species also act to provide a source of protons to facilitate the ionization process. Large-flow electrosprays can benefit from nebulization of a heated inert gas such as nitrogen or carbon dioxide in addition to the high temperature of the ESI source.The aerosol is sampled into the first vacuum stage of a mass spectrometer through a capillary carrying a potential difference of approximately 3000 V, which can be heated to aid further solvent evaporation from the charged droplets. The solvent evaporates from a charged droplet until it becomes unstable upon reaching its Rayleigh limit. At this point, the droplet deforms as the electrostatic repulsion of like charges, in an ever-decreasing droplet size, becomes more powerful than the surface tension holding the droplet together.At this point the droplet undergoes Coulomb fission, whereby the original droplet 'explodes' creating many smaller, more stable droplets. The new droplets undergo desolvation and subsequently further Coulomb fissions. During the fission, the droplet loses a small percentage of its mass (1.0–2.3%) along with a relatively large percentage of its charge (10–18%).

Capillary electrophoresis-mass spectrometry was enabled by an ESI interface that was developed and patented by Richard D. Smith and coworkers at Pacific Northwest National Laboratory, and shown to have broad utility for the analysis of very small biological and chemical compound mixtures, and even extending to a single biological cell.