Electro-optical sensors and its applications 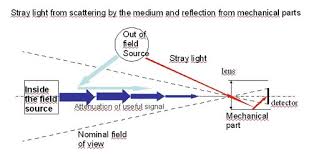 Electro-optical sensors are electronic detectors that convert light, or a change in light, into an electronic signal. These sensors are able to detect electromagnetic radiation from the infrared up to the ultraviolet wavelengths.

There are many different kinds of optical sensors, the most common types are:

An optical sensor converts light rays into electronic signals. It measures the physical quantity of light and then translates it into a form that is readable by an instrument. An optical sensor is generally part of a larger system that integrates a source of light, a measuring device and the optical sensor. This is often connected to an electrical trigger. The trigger reacts to a change in the signal within the light sensor. An optical sensor can measure the changes from one or several light beams. When a change occurs, the light sensor operates as a photoelectric trigger and therefore either increases or decreases the electrical output. An optical switch enables signals in optical fibres or integrated optical circuits to be switched selectively from one circuit to another. An optical switch can operate by mechanical means or by electro-optic effects, magneto-optic effects as well as by other methods. Optical switches are optoelectronic devices which can be integrated with integrated or discrete microelectronic circuits.

Optical sensors can be found in the energy field to monitor structures that generate, produce, distribute, and convert electrical power. The distributed and nonconductive nature of optical fibres makes optical sensors perfect for oil and gas applications, including pipeline monitoring. They can also be found in wind turbine blade monitoring, offshore platform monitoring, power line monitoring and downhole monitoring. Other applications include the civil and transportation fields such as bridge, airport landing strip, dam, railway, airplane, wing, fuel tank and ship hull monitoring.

Among other applications, optical switches can be found in thermal methods which vary the refraction index in one leg of an interferometer in order to switch the signal, MEMS approaches involving arrays of micromirrors that can deflect an optical signal to the appropriate receiver, piezoelectric beam steering liquid crystals which rotate polarized light depending on the applied electric field and acousto-optic methods which change the refraction index as a result of strain induced by an acoustic field to deflect light.Another important application of optical sensor is to measure the concentration of different compounds by both visible and infrared spectroscopy.