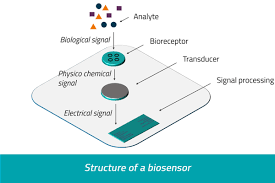 Biosensors are devices used to detect the presence or concentration of a biological analyte, such as a biomolecule, a biological structure or a microorganism. Biosensors consist of three parts: a component that recognizes the analyte and produces a signal, a signal transducer, and a reader device. The sensitive biological element, e.g. tissue, microorganisms, organelles, cell receptors, enzymes, antibodies, nucleic acids, is a biologically derived material or biomimetic component that interacts with, binds with, or recognizes the analyte under study. The transducer or the detector element, which transforms one signal into another one, works in a physicochemical way: optical, piezoelectric, electrochemical, electrochemiluminescence etc., resulting from the interaction of the analyte with the biological element, to easily measure and quantify. The biosensor reader device connects with the associated electronics or signal processors that are primarily responsible for the display of the results.

These instruments have a wide range of applications ranging from clinical through to environmental and agricultural. The devices are also used in the food industry.

Biosensors are used in the food industry to measure carbohydrates, alcohols and acids, for example, during quality control processes. The devices may also be used to check fermentation during the production of beer, yoghurt and soft drinks. Another important application is their use in detecting pathogens in fresh meat, poultry or fish.