Chemical sensor and its types 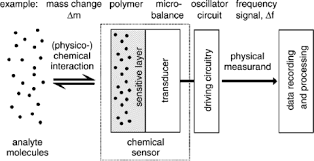 A chemical sensor is a device which responds to a particular analyte molecule in a selective way in the presence of other molecules through a chemical reaction and can be used for the qualitative and quantitative determination of the analyte in the complex sample. After recognition of a molecular entity, the chemical sensor transduces the signal through a physicochemical process into an electrical signal which can be further amplified and processed.While before chapter deals with different types of acoustic transducers, this tutorial focuses on the chemical sensing layer that affects the molecular recognition and the different transducers that can be employed. Different types of chemical sensors include different transducing methods to obtain processable electrical signals.

The present trend is to integrate the chemical sensor with microelectronics and sample handling. This has led to impressive achievements in miniaturization using silicon micromachining methods and more recently soft lithography techniques. In addition, the recent explosive growth of microfluidics has allowed liquid samples to be transferred by electrophoretic driving forces into contact with an array of chemical microsensors giving rise to the concept of lab-on-chip. This is a fully integrated chemical laboratory in a microchip with applications as wide as health care and remote medicine, environmental control and food analysis. Applications in the area of explosive early detection, chemical and biological warfare has recently emerged as a fast growing field.

Patients requiring rapid blood analyses in emergency rooms, intensive or critical care units as well as in the operating theatres can undergo rapid blood tests with only a few drops of whole blood with the point-of-care systems. In 1985 Dr. I. Lauks developed the I-Stat point-of-care blood analysis system. It comprises a single-use cartridge containing an array of electrochemical sensors capable of measuring blood oxygen, CO and pH. Also it measures electrolytes such as potasium, sodium, chloride, calcium ions, glucose, urea nitrogen and hematocrit in few minutes with only a few drops of whole blood. The development of I-Stat was made possible by the incorporation of microfabrication techniques from the microelectronic industry in a 5 x 4 mm chip.

There are also examples of commercial systems to monitor glucose in a tiny drop of whole blood of a Diabetes Mellitus patient. Glucose levels in the clinical range 20-600 ng dL -1 can now be measured in 20 seconds with a drop from 0.3 to 3.5 μL of whole blood using commercial integrated chemical sensors. Implantable glucose sensors have also been developed.

An alternative novel way of chemical sensors is the electronic nose. This olfaction machine is an electronic device capable of detecting and recognizing complex odors. Unlike molecular recognition, electronic noses work on the principle of multiple signal detection and pattern recognition. The signal can be generated by chemical detection interfaces with changes of conductivity of a solid state or conducting polymer prompted by the interaction of analyte molecules from a complex sample. The signal transduction can be affected by a variety of physicochemical processes, i.e. metal-oxide gas sensors, conducting polymer gas sensors, bulk and surface acoustic wave gas sensors, field effect chemo-transistors, electrochemical gas sensors, etc. They are normally used in a multisensor array to generate a signal pattern.