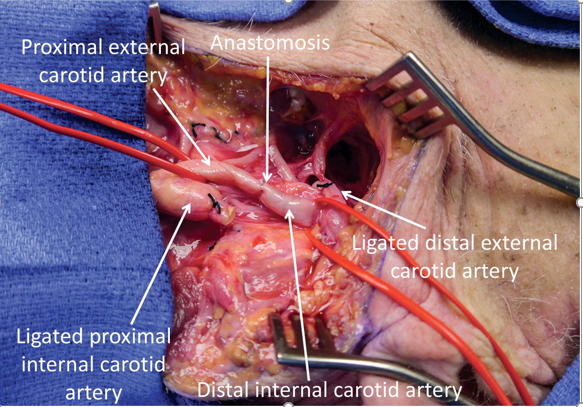 Blunt trauma-related carotid artery injuries also cause thrombosis and delayed neurological defects and are associated with mortality rates of up to 40%. In this series of 17 patients with carotid blunt trauma, three had no symptoms, ten patients had paresis of the limbs and four had significant neurologic deficits.

Extreme arterial injuries are characterized by life-threatening hemorrhage or ischemia which leads to loss of limbs. The extreme venous damage, in sharp contrast, is represented by hemorrhage but not ischemia. Bleeding can be internal or external, and can rarely result in a hypovolemic shock.

Blunt trauma is a physical wound to a part of the body, either by impact, disability or physical attack. The latter is also referred to as the damage of blunt force, but it can also result from the effect of high velocity. Blunt trauma is the initial trauma from which more complex forms arise, such as contusions, abrasions, lacerations, internal bleeding.

1. Blunt abdominal trauma: Blunt abdominal trauma (BAT) is the most common form of this injury, accounting for 75 per cent of all blunt trauma. Most occur in motor vehicle collisions, in which rapid deceleration can catapult the driver into the steering wheel, dashboard or seatbelt, causing contusions in less severe cases

3. Blunt cranial trauma: The main health concern in cases of blunt head trauma is brain damage, although other tissues, including the skull, ears, orbits and arms, are also at risk.

In the spectrum of traumatic entities, cervical trauma is one of the less common ranging from 1 to 2.6% of all blunt traumas. Skull base fractures, cervical, facial and spinal fractures in addition to chest trauma have been identified as associated risk factors for cervical injuries. Approximately 1% of patients with major trauma have cerebrovascular trauma, these lesions are more common in patients with severity scores for trauma higher than 16 points and those who require more than 24 hours in hospital

Carotid blunt trauma becomes important in suspicion and early diagnosis due to his association with high rates of ischemic stroke (60%), severe neurological sequelae and high mortality (19- 43%), these patients are asymptomatic initially in 66-73% and may have stroke symptoms even 31 days after the trauma event

However, none underwent arteriography for diagnosis or endovascular management was offered because this diagnosis was not suspected. There is no consensus about medical management with anticoagulation or antiplatelet therapy for stroke prophylaxis. There are multiple non-randomized studies and case reports where the application of systemic anticoagulation improves prognosis in patients with neurological symptoms and prevents stroke in asymptomatic patients

Authors can submit their manuscript related topics like Blunt Trauma, Chest Trauma and Artery Trauma by the email to our Journal Mail IDs trauma@emedicalsci.com or jtac@peerjournal.org